From instability in Colombia to a Reno backyard family farm

Adriana Marin-Herrera came to the U.S. from Colombia when she was 16.  Did she find success, love and a place for herself here?  Listen to my story and find out! 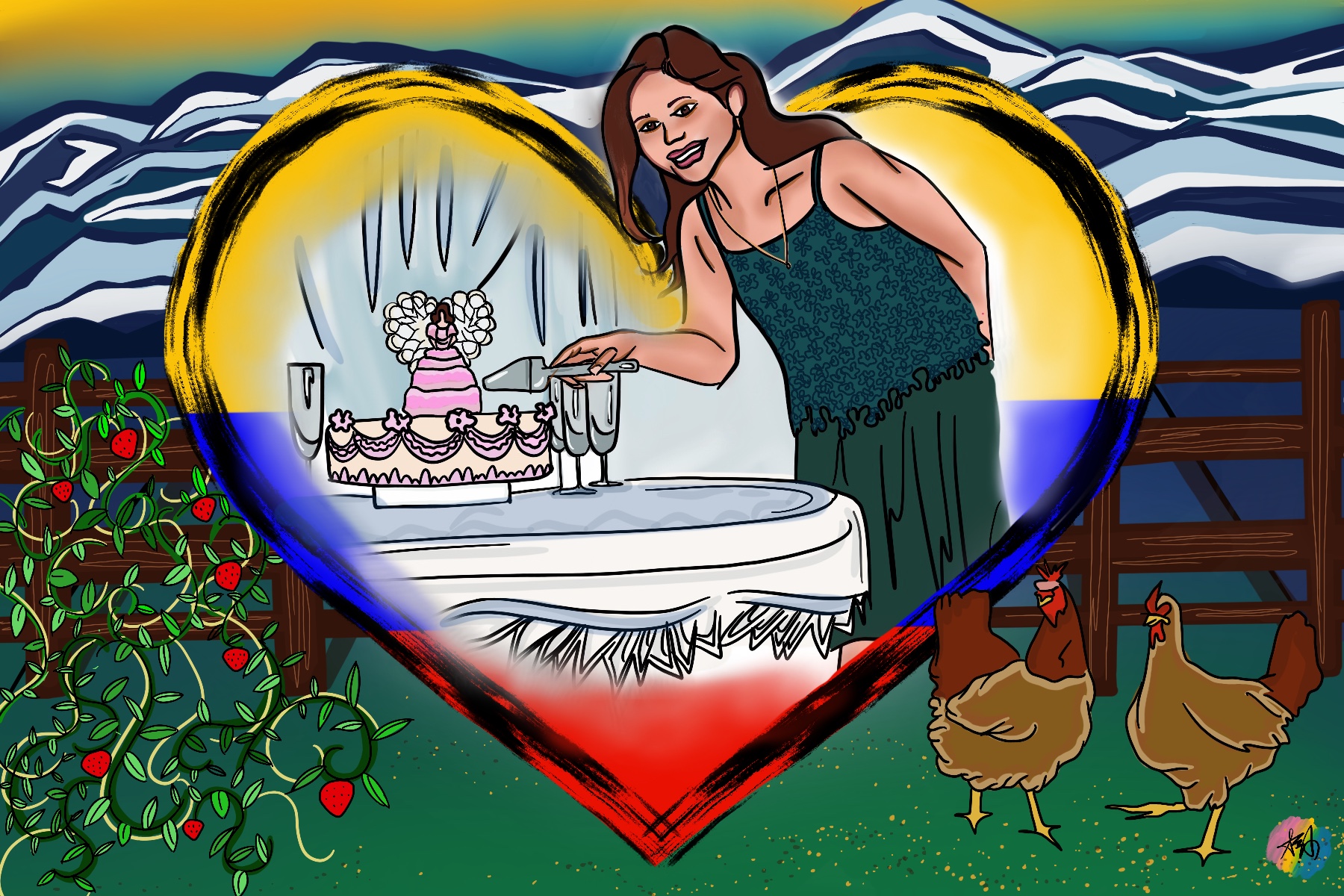 Leaving Colombia and Her Mother Behind

Adriana Marin-Herrera, 36, feeds her chickens in a large backyard coop she made herself, while her husband plays paddle ball with two of their daughters on their lawn. Her mother is inside their colorful and spotless home helping their three-year-old after her nap.

Marin-Herrera was born in Cali, Colombia.  She spent her early childhood attending an American school, where her father worked as an accountant.  This enabled his children to attend the school on a scholarship. Marin-Herrera excelled there, finding it a place of safety and peace.

In 1993, the drug kingpin Pablo Escobar was murdered in Colombia.  This caused unrest that left Marin-Herrera’s family feeling deeply unsettled. Eventually her father and his then fiancé moved to the United States. In 1998, when Marin-Herrera was 16, she chose to leave Colombia and move to the U.S. with her father, sister and new stepmother.

This meant leaving her mother behind, which was a wrenching, difficult decision for Adriana.  For the first several months after arriving in the Reno, Nev. she cried every day for her mother. Tearfully she recalled that her father wrote to her mother and said, “You need to come fast – Adriana’s crying every night.”  Her mother was an attorney and therefore was able to pass her background check fairly quickly, and she moved to Reno when Adriana was about 18.

“I am choosing to stay in the U.S. but we have the chance to live in other countries for at least two months at a time. So that’s the plan, that at some point the kids will go to India one school year and I will go with them and learn Punjabi completely and adapt.  At some point we’ll go to Colombia for six months to a year and get to know my culture completely.”
Adrianna Marin-Herrera

From Instability in Colombia To a Reno Backyard Family Farm

by Leah Wigren | Next Generation Radio | University of Nevada, Reno | May 2019 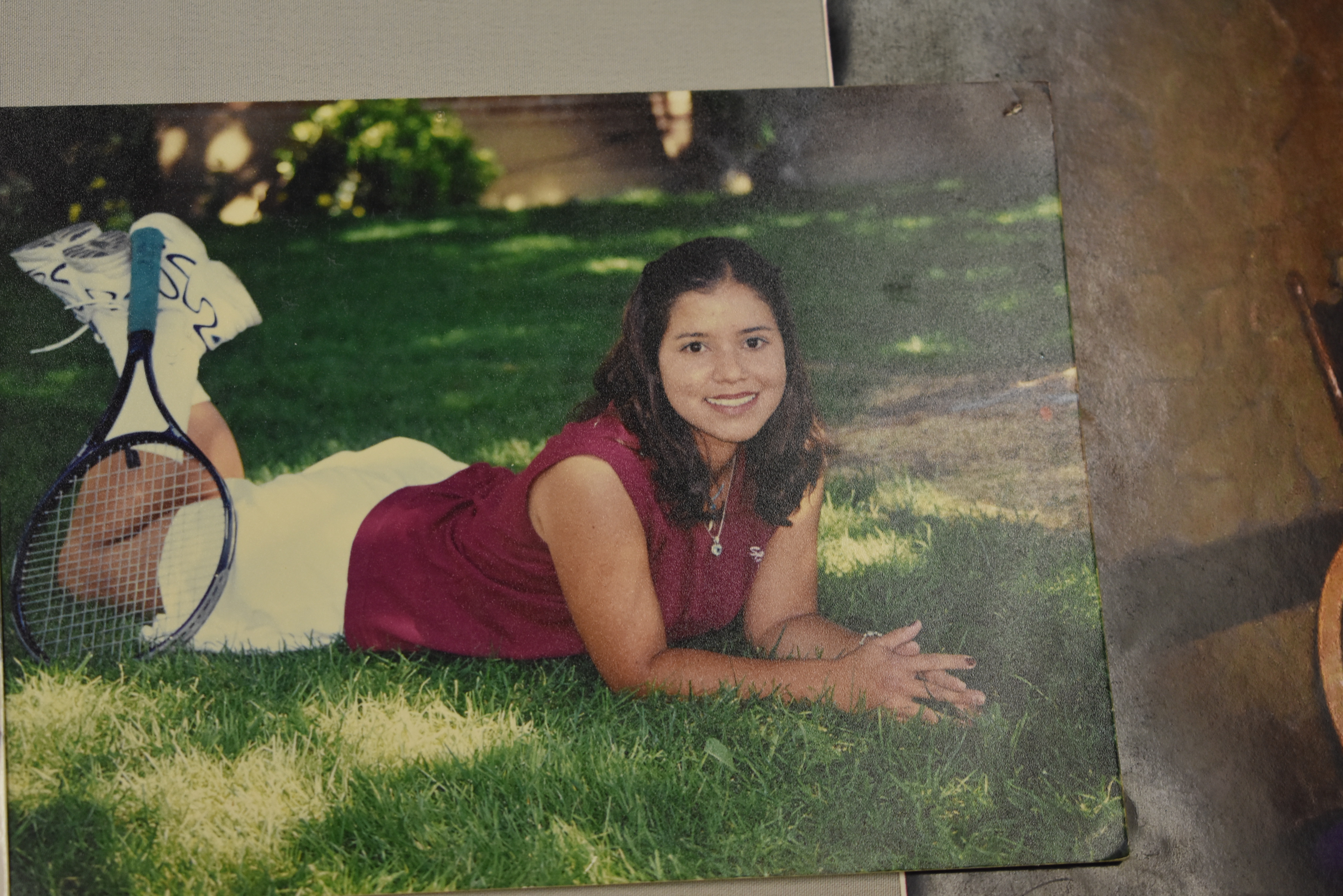 Adriana Marin-Herrera was able to continue sports she played in Colombia, such as tennis, which helped ease her transition.

Excelling in Her New School and Finding Love

Marin-Herrera continued to excel in school after moving to Reno. She enrolled in Sparks High School and immediately gained the respect of a chemistry teacher, Mr. Guyer.  She wanted to attend college and major in marine biology, but the tuition was more than her family could afford.  Mr. Guyer knew about the Gates Millennium Hispanic Scholarship Fund, and encouraged Marin-Herrera to apply.

Marin-Herrera, Mr. Guyer, and other teachers collaborated to complete the scholarship application, and she was awarded a scholarship that covered her higher education through her doctorate. Marin-Herrera attended the University of Nevada, Reno, and majored in biology. Thereafter she obtained her Master’s in education. At age 27 she started a Ph.D. program in environmental science.

Around this time she met her second husband, Serj Johal.  When Marin-Herrera was 23 she was briefly married, but said her first husband left her for another person about a year into their marriage.  When she met Johal, who is from India, she knew it was different. He understood her feelings and experiences about coming to the United States from another country. On their wedding day, Marin-Herrera dressed in a beautiful Sari and Johal wore his Sikh turban.

Johal is an entrepreneur and owns a small restaurant in downtown Reno named Thali.  He serves vegetarian Indian food that represents the meals his parents served during his childhood.  Marin-Herrera strives to be strictly vegetarian, but is not quite there yet. 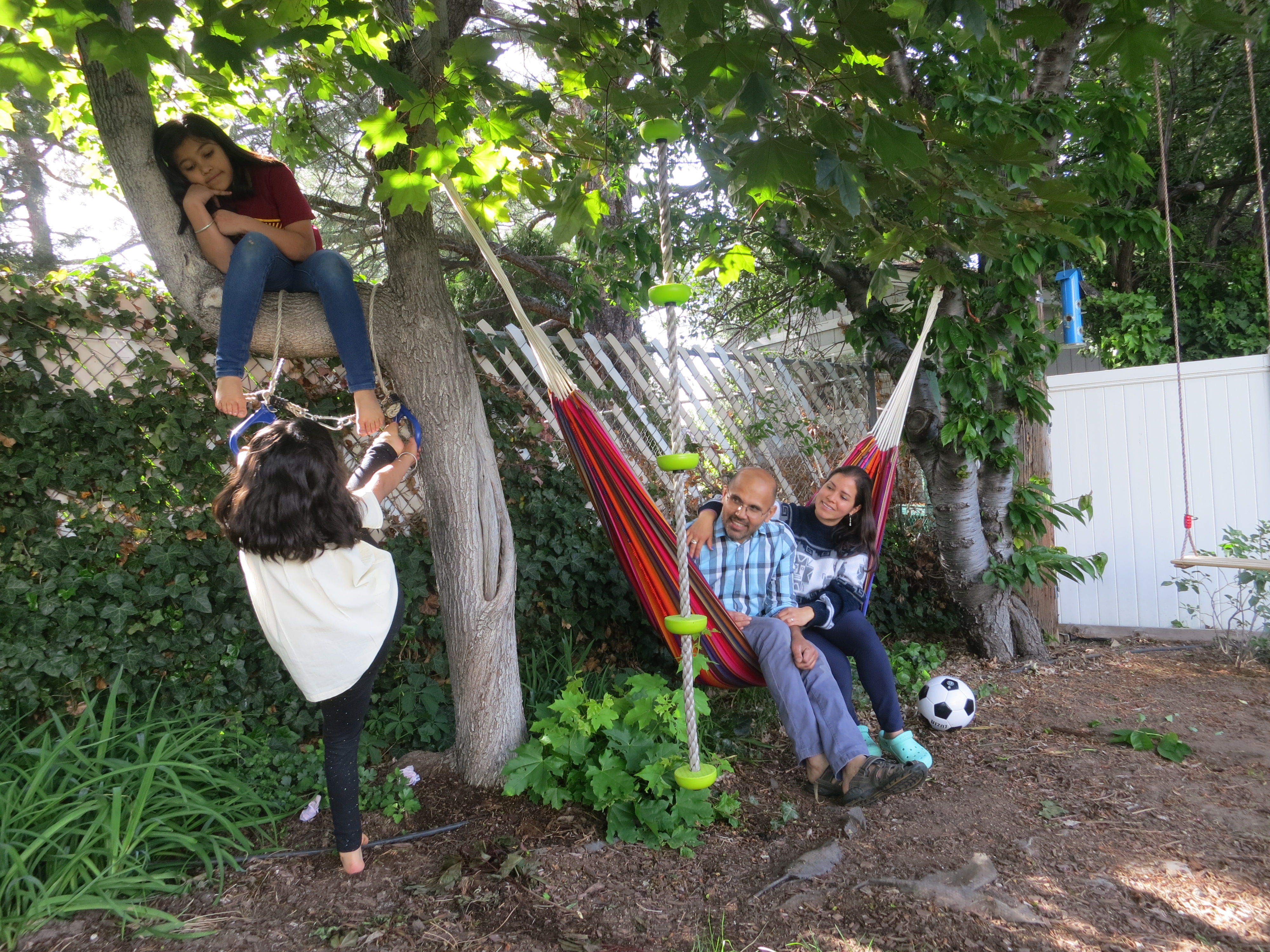 Adriana Marin-Herrera, Serj Johal and two of their daughters enjoy their lovely backyard in south Reno together.

Writing about Her Cross-Cultural Family

Johal and Marin-Herrera have three daughters ages 3, 5 and 9.  About ten years into their relationship, Marin-Herrera noticed she was struggling with the cultural differences between South America and India.  She was able to adapt to some but not all of the expectations her Indian in-laws had for her.

There was tension around this which led Marin-Herrera to write a book called The Blessings and Challenges of a Mixed Race Family in the United States: A Memoir.  She self-published the book, and it is available online.

“I wrote it more like as a memoir for myself and the kids and [it’s good] if it helps the children or the parents who are mixed race to raise their kids in a way where they include the culture and the religion and the languages,” she said.

Her husband speaks to the children in Punjabi and Marin-Herrera reads to them in Spanish. She does this so her children can be trilingual. Additionally, she borrows between 20-30 books from the library every month, many in languages like Chinese and Arabic, and she and the girls look at them together. 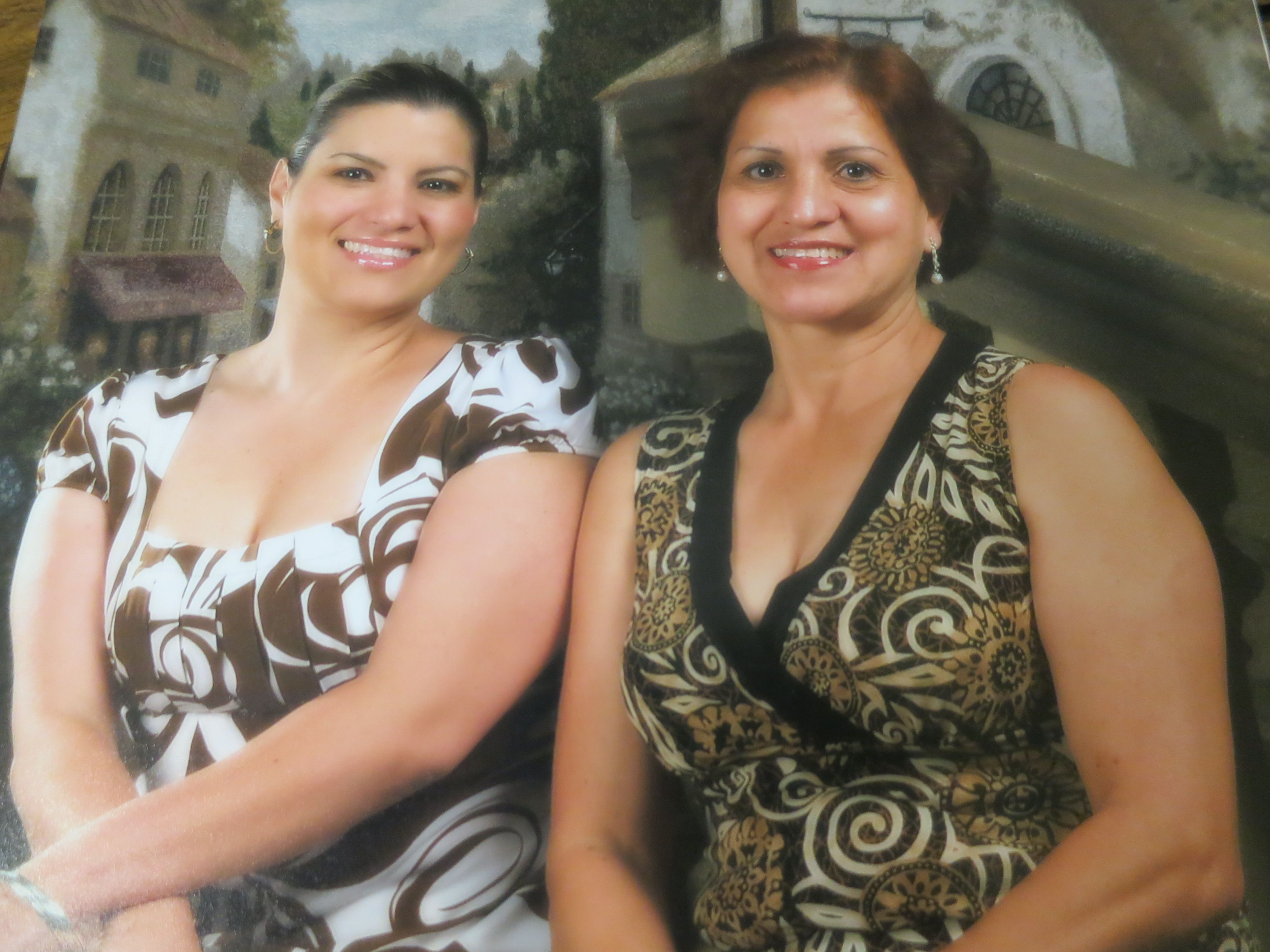 A photograph of Adriana Marin-Herrera and her mother, Amparo, who now lives with her again and provides emotional and household help.

Reuniting with Her Mother at Home

Marin-Herrera’s mother, Amparo, lives with the family and has not practiced law since being in the United States.

“My mother helps me a lot,” Marin-Herrera said. “She cooks a lot of our food.”  She also helps with Marin-Herrera’s three- year-old daughter, Salma. Marin-Herrera emphasized that her mom backs her up when the children get out of hand.

The children have an idyllic life with Marin-Herrera, their dad and their grandmother. They recently moved into a five bedroom, six bathroom home where everyone has plenty of space and their cat chases birds around the backyard.  The large kitchen pantry has been converted to a children’s area, with rows of toys and shelves of books.

“I am choosing to stay in the U.S. but we have the chance to live in other countries for at least two months at a time. So that’s the plan, that at some point the kids will go to India one school year and I will go with them and learn Punjabi completely and adapt. At some point we’ll go to Colombia for six months to a year and get to know my culture completely.”